It Pays To Hang Onto Your Media, Kids 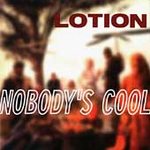 I actually own a copy of Lotion's album Nobody's Cool (1996), which infamously (at the time) had liner notes from Thomas Pynchon. Now, 13 years later, it turns out at least part of the back story was a hoax. (Conversely, it seems that the new book trailer is actually narrated by him.) And just to be annoyingly elusive and insinuating, just like the master, I'll add: a prominent dot-com mogul grew up in an apartment right next to Pynchon and describes him as very normal. GUESS WHO!

+ I can't think of another album that was famous for its liner notes.

+ This one of those rare examples of owning the physical artifact seems advantageous.

I bought this album just for the liner notes, and thought the music was very disappointing. (Haven't heard it in years, so maybe I was wrong.) It was the early days of the internet, obviously.

I really liked their terribly-titled song "Marijuana Vietnam," which is apparently from the Agnew Funeral EP but I found on a CMJ sampler.

The most fascinating part of this article is what the dudes are up to these days: working at the Times and Wired. I'd love to see a Where Are They Now: Indie Bands Of The 90s update. (Is "I Love Music" still around? I bet they could put it together in like three hours.)