Are Utz Better Than Nuts? 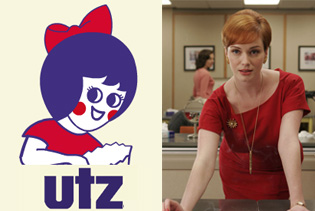 I seem to have at least one conversation per day about Mad Men -- there's always at least one person in my life who wants to talk about Draper's lechery, Peggy's baby, or Joan's bosom. Lately, many of those conversations meander toward questioning the psychology of advertising, which is of course what Matthew Weiner wants us to be thinking about. Eventually the role of product placements comes up, which is the perfect manifestation of contemporary advertising's darkest psychoses: deception and desire.

Since the episode where Betty buys Heineken, I've been obsessed with the singular question of whether Heineken was an actual product placement. (This question nagged me more than what the fuck was going on with Peggy's baby.) Finally, New York has published a story that answers this question and several others about the product placement game: What Tina Fey Would Do for a SoyJoy?

Among other things, it reveals that Heineken was indeed an embedded advertisement. Doy, of course it was, just like Snapple in 30 Rock and Staples in The Office. The author, Emily Nussbaum, goes on to say that within the top 10 shows alone, there were 26,000 product placements on network television last year. The first half of her piece prepares us for the inevitable:

If two decades ago music fans raged when Nike co-opted the Beatles' "Revolution," these days the most "independent" musicians vie to be on Gossip Girl. James Bond drives a BMW, Carrie Bradshaw drinks Skyy vodka.

So just shut up, this is the future.

The second half lets you down with more examples to embarrass your heroes: that Ben & Jerry's bit with Colbert? Yep. That SoyJoy sketch on 30 Rock? Yep.

SoyJoy becomes the example to eventually make Nussbuam's ultimate point about how product placements might not actually be helping the product. She talks to Joss Whedon who confesses that he didn't know that SoyJoy was even a product, much less a placement. She concludes:

It occurs to me that the 30 Rock integration was a failed experiment. After all, the product looked to me (a woman 18 to 49!) like a punch line.

And so it is a return of the repressed -- Mad Men. The entire show is one big game of sublimated knowledge: Who knows what about who slept with whom? Lust and greed are the currency at the offices of Sterling Cooper. When mixing power and sex, desire and deception are the emotional outcomes. Advertising is merely the by-product of this formula applied to capitalism.

If there is one prevailing tone in Mad Men, it's the fraught tension of not knowing. This also happens to be the exact tension of product placements. And now that my curiosity has been satiated about Heineken, I must seek out a new victim to interrogate. Or to put it differently: Are Utz better than nuts?

I still say the Lucky Strikes are the most interesting example, because for the price of one product placement early on in the series, they are effectively featured every time someone lights up on the show. And this for a product that supposedly is illegal to advertise on TV!

But so, Snapple on 30 Rock is one thing -- what about Snapple in the "I'm fucking Matt Damon" video? What about that??

i'm just happy to know that i wasn't the only person who thought soyjoy was a joke brand.

This is great dude. I like this idea of not knowing working both inside and outside the show, for the characters and the viewers, and I guess it's why I recently argued that the show fails as satire: because reproduces the economy of desire it purports to critique. I can't tell if you're just diagnosing this or evaluating it, but I think the lack of sureness that stems from constantly being asked to desire - people, things, images, ideas - is the really sinister, unhealthy thing about modern capitalism.

I exist only to diagnose.

We didn't really have Utz on the shelves in Boston growing up. So this resolves a great mystery to me: