Nearly a dozen years ago, Douglas Coupland published his third novel, Microserfs, at a moment where everyone knew the future was about to happen, but no one knew quite what it would look like. 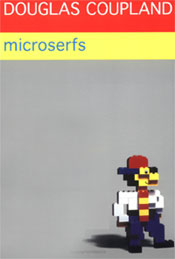 After moving to Seattle a month ago to work on the campus depicted in the novel, I returned to the same book that many years ago intrigued this Midwestern twenty-something, to see how the world (and my perspective on it) has changed. I have several conclusions, which I'm aggregating for a longer analysis. In the mean time, I have gathered the notes that I scribbled in the margins of the book. Below is a mish-mash of observations about cities, companies, and Microserfs, then and now.

+ The basic plot arc of Microserfs is that an ensemble of 'softies quit their jobs and move to San Fran to create a new software start-up. They begin building something called Oop! (can this sound any more like present?), which actually is a pun off object-oriented programming, but is essentially a 3D modeling program which you can use to create pretty much anything. The idea is loosely inspired by Legos, but in the intervening decade nothing has been invented to compare it to -- until I recently saw Will Wright demo his new game, Spore.

+ Even though the inaccurate predictions are less numerable, they say more about the mid-'90s than the accurate ones.

+ The descriptions of Microsoft campus life -- right down to the soccer fields and hidden paths -- are still quite accurate. The detail that seems to have changed the most is the relationship of employees to Bill. He was apparently a Geek God in 1994, whereas now he's more of a beleaguered Yoda. It's good we skipped over the anti-trust days though.

+ There's a great observation early in the book about how Microsofties don't put bumper stickers on their cars. This is still startlingly true, and it gives campus a sort of post-political feel. Or at least as post-political as 20,000 Audis lined up in a cement parking garage can be.

+ Except for occasional baby pictures and markup boards, Microserfs don't decorate their offices. At all.

+ At the beginning of the book, Apple is at the top of the world -- the computer company that all geeks aspire to. By the end of the book, the boys from Cupertino are sliding into oblivion, rumored to be bought out by Samsung. How many times has Apple died and been resurrected?

+ Quick quiz: what was the subtitle of Coupland's first novel, Generation X? Bzzt. "Tales for an Accelerated Culture." So much for slackers.

+ Off-topic: Has anyone else noticed that Ginsberg's "Howl" needs an update? I'll take a shot at it: "I saw the best minds of my generation, destroyed by Aeron chairs, tattooed hyper fresh, dragging themselves though Ikea on Sundays looking for an angry futon." Perhaps this is where a Wiki could help. Wiki Howl!

+ It seems unfathomable now, but this book was published before Windows 95 even came out.

+ Know what else people forget about this book? It's written in diary form. And you know what else? Less than a third of it happens in Seattle -- the rest occurs in Silicon Valley, except for the second-to-last chapter which is in Vegas (at CES).

+ Microserfs places Seattle in opposition to San Francisco. While there is still a tension between the Emerald City and Silicon Valley, Seattle now posits itself in relationship to Los Angeles.

+ Since moving here from Minneapolis, I constantly find myself appending rows to a grid that I've drawn in my mind with two simple columns: Minneapolis | Seattle. When I decide which city has "won" a particular feature, checkmarks get added to new rows of the mental grid. Traffic, for instance, of course gets a Minneapolis check, while food goes to Seattle. Daily papers, Minneapolis; weekly papers, Seattle; malls, Minneapolis; record stores, Seattle; pizza, Minneapolis. I already have hundreds of rows in my micro-niche grid. By the way, Seattle's Ikea totally sucks.

+ I am convinced this book could not exist today -- not in its current form, as fiction. Our first-person culture would undoubtedly force it into a memoir. Or perhaps Scoble is the modern equivalent. Microserfs even hints at its historical future by being structured like a journal. We all speculate about how blogging is changing journalism, but one should ask if memoirs are doing the same thing to fiction, especially in light of Freygate. Exploring this, you see, is partially why I moved to Seattle, and I hope to devote more thinking in this space. To be continued...

I absolutely adore that book, as well as most things written by Coupland. I've probably read it ten times and it's still just as good every time I read it (although I usually skip to the part with the reasons cereals are decadent when I'm introducing the book to new people, as that's absolutely my favorite list). The fascinating part about reading Coupland is that he can take a book so *about* one thing and make it so completely about something else before you even notice. But I digress.. great post, great book, and has it really been 12 years? Le sigh...

Thanks for doing this. I haven't re-read the book but cite it all the time. To me, it captured an era in Silicon Valley right before it disappeared. The dot-com startups replaced the software startups and for most people who came to the Valley, that was all there ever had been. I got here a few years before that and felt like "my" era (though it was never something I did professionally, it was part of my culture) had been forgotten by those that didn't experience it, and replaced for those that had experienced it. Much of the book was obsolete soon after it came out.

Hmm. URL is not a real URL. Let's see if this works?

Hah, well there you go. We still could use a wiki.

Uh...traffic in Minne better than Seattle? What, are you nuts? Or just full-blood Norwegian? Did I misread your entire checklist? Minneapolis traffic, not in quantity, but in flow and courtesy is worse than Buenos Aires during a coup de tat. Seattle has a lot of cars, sure, and a few gummy spots, but it is a shamanistic peace dream in comparison to the third circle of hell that is 494 and the crosstown. What? What?

"I am convinced this book could not exist today" You know, Coupland is working on a sequel to it? It supposedly takes place at EA, but I didn't get much more detail than that.

Geoff: The "sequel" (I suspect he'd reject that term) is jPod.

Eddie: Traffic is much, much, much worse in Seattle than Minneapolis. Here's a quick city-by-city comparison (a few years old, but probably not much different now -- not sure if there's a more current version out there).

I do hope you were referring to number and not quality re: daily/weekly papers there.

Do I think the SeattleWeekly/Stranger combo is better than the CityPages/Pulse combo (or drop The Pulse if you feel like it)? Yes, for all kinds of reasons.

Do I think the Strib/PiPress combo is better than the PI/Times combo? Yes, for all kinds of reasons.

"hey begin building something called Oop! (can this sound any more like present?), which actually is a pun off object-oriented programming, but is essentially a 3D modeling program which you can use to create pretty much anything." is this true??? sounds a lot like second life, i guess.

i made the same comparison's list between Minneapolis and Los Angeles.

Twin Citians really don't understand how good we have it in terms of traffic. As a friend who lives in Bellevue, WA said to me when visiting recently, "Minneapolis has so many highways." My mom has made the same observation when visiting my brother and sister who live in the Denver metro.

As someone who was born and raised in Seattle and has spent five years in Minneapolis, I think your list is nearly spot on, with the exception of the Star Tribune being better than the Seattle Times. I think of three places where this is immediately false: The design of the papers and the quality of the A&E and Business sections. Not to mention that one can't walk from one end of Seattle's downtown in 15 minutes, as is the case in Minneapolis.